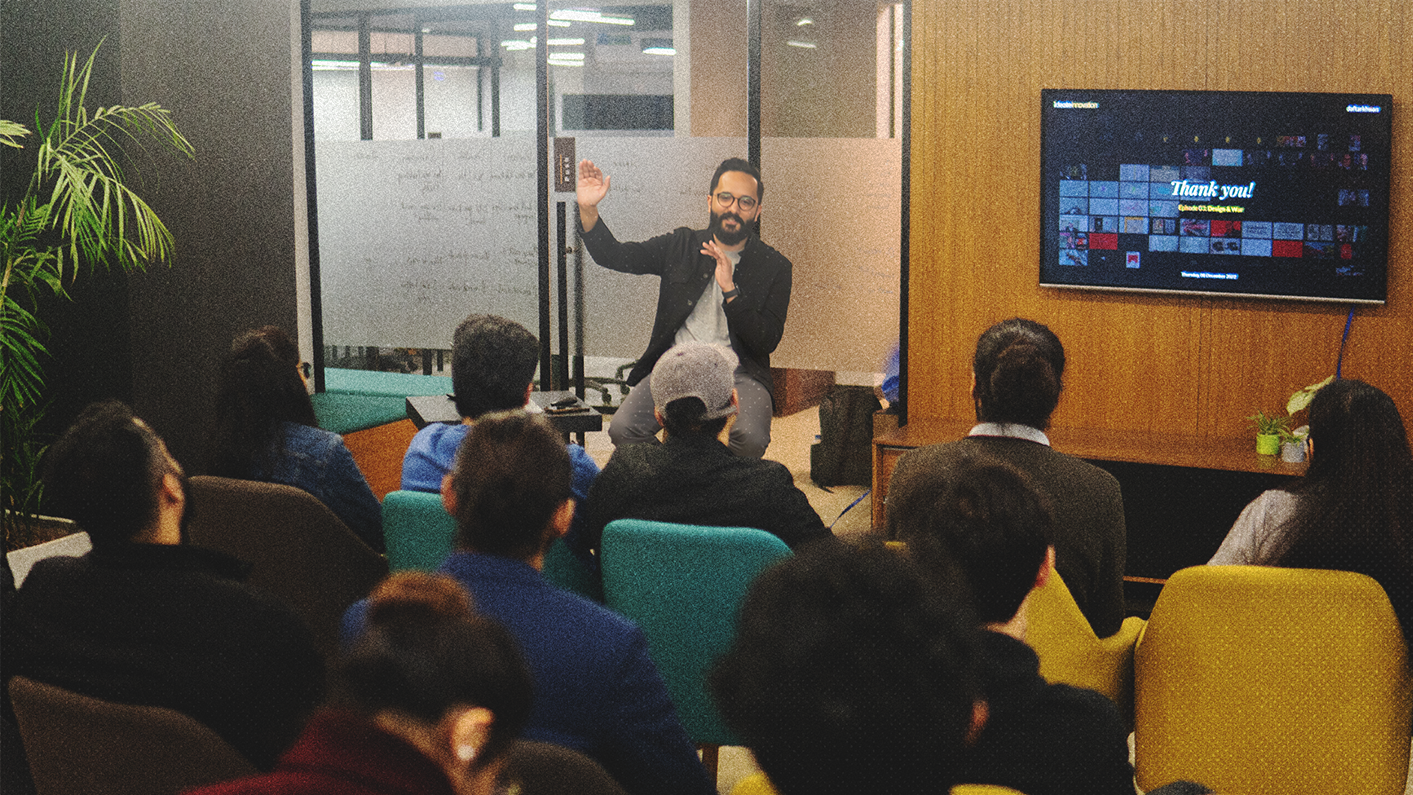 Islamabad, PK (December 13, 2022): Ideate Innovation and Daftarkhwan partnered for the third talk in the ‘Design & the World’ series. Ali Murtaza, head of design at Ideate, focused this session on “Design & War,” specifically the influence of design in various facets of war throughout history. Centered around the utility of war and moral considerations within design, the discussion pushed the audience to revisit their basic understanding of design, particularly from a human-centered approach. The audience was keen to weigh in and offer their input, which led to a forty-minute question and answer session following the talk.

Mr. Murtaza cited examples of several useful inventions and accelerated mass production of modern-day necessities as an outcome of war, including computers, food preservation, zippers, duct tape, and ballpoint pens. He specifically explained how Penicillin was discovered in 1928 but began mass production fourteen years later during wartime. This particular example highlighted how war takes lives but a wartime act led to a life-saving drug and longer life expectancy.

“One of the goals of these talks is to get people to think about the complexity of the world we live in, and design for,” Ali Murtaza elaborated after the event. “This necessitates that we think beyond the narrow design briefs we work on, and thoughtfully assess the broader ethical, moral and societal consequences of the work we do. This way of thinking should also help us build more empathy for others, making us better researchers and designers — and more importantly, better citizens”

A portion of the session brought human emotions into the discourse with respect to the design of war memorials. Mr. Murtaza told attendees how memorials are generally made to instill remembrance, peace, and sometimes religion into the observers. When examples of the peaceful and pleasant memorials were shown, the audience concurred with the thought behind the design. They also gave an equally strong appalling reaction when they were shown memorials built to reflect the might of a nation that directly or indirectly posed a negative connotation for the opposing party.

The ‘Design & War’ talk also discussed design as an occupation during a war. Mr. Murtaza posed the notion that generally, designers would not be willing to contribute to the production of a weapon. However, if they had no other option but to build weapons for an income, they would do so in spite of their ethical dilemma. Hence, Mr. Murtaza was able to establish that morality could change given certain contexts or with different perspectives. This left attendees with the opportunity to ponder their personal motivations in design and reflect on their actions as designers, as well as future decisions. It also gave them a refresher course in abandoning biases in their work as researchers. Ali Murtaza encouraged the crowd to take a variety of perspectives into account to conduct better research.

Product Designer at Arbisoft Ibrahim Khan had this to say after attending the session: "My favorite part of attending these talks has been how Ali presents morally ambiguous scenarios that put a lot of weight and emphasis on the audience forming their own opinions, while also engaging in discussion with others.."

Ideate will continue hosting “Design & the World” talks in the coming months to take a deeper look at intriguing intersections of design.